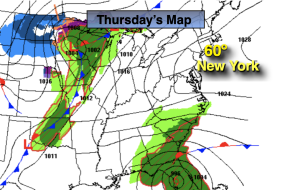 Today will feature above average temperatures as we get on the milder side of departing Atlantic high pressure. Average highs are in the mid 50s. High clouds will fan the sky ahead of the next system working in late in the day.

It’ll be much milder tonight than recent nights as the flow works up from the South.

On Friday, a cool front will head our way. In addition to this feature, a tropical low (once Nicole) will be moving up the coastal Piedmont. Rain will likely develop Friday afternoon and possibly become heavy at times at night. Winds may become gusty. It will be very mild Friday.

Early morning showers Saturday will give way to mainly sunny skies. Temperatures will be well above average.

Colder air will push in for Sunday as the flow comes from Canada with readings below average by several degrees. Monday will most likely be the chilliest day of the season so far.

Thickening clouds. Rain likely by midday. Warm. Highs in the upper 60s to around 70º.

Early morning showers. Becoming sunny. Warm. Highs in the upper 60s to around 70º.

More clouds than sun. Chilly. Highs in only around 50º.