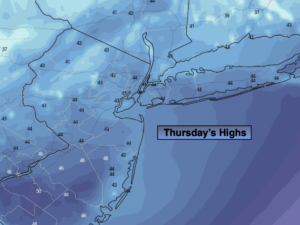 Readings will get above the average high of 39º today as high pressure continues to move offshore. A mix of sun and clouds is expected.

Tonight will be another night with readings well above freezing along the urban corridor. Inland readings will be just below freezing.

Friday will be a changeable day. Low pressure will develop and move up and well off the Eastern seaboard. This will result in clouds giving way to sun and an increasingly strong Northerly wind. Temperatures will. be around 40º and then tumble as Canadian air rushes in later in the day.

A bitter blast will grip the area Saturday. Despite abundant sun, readings will only remain around 20º.

The storm will pull away Monday morning with the sun returning during the afternoon.

Partly cloudy. Lows in the mid 30s in the City, the 20s inland. Light Northeast wind.

AM snow, rain, mix depending on location. Afternoon sun. Highs around 40º.