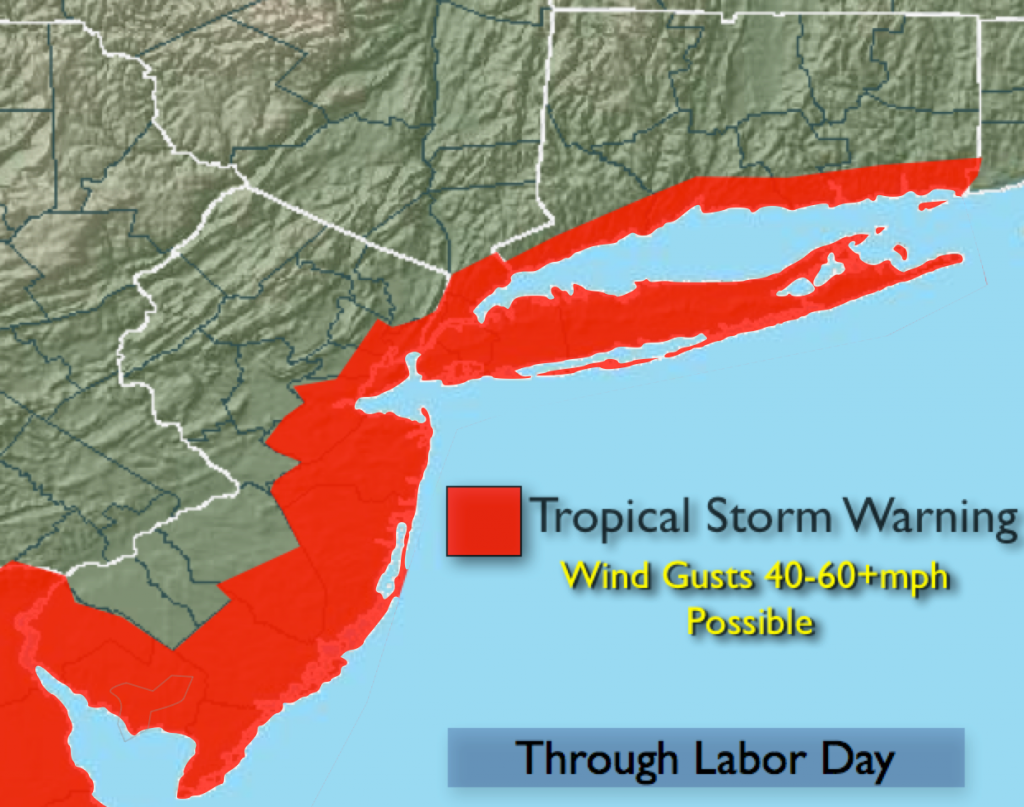 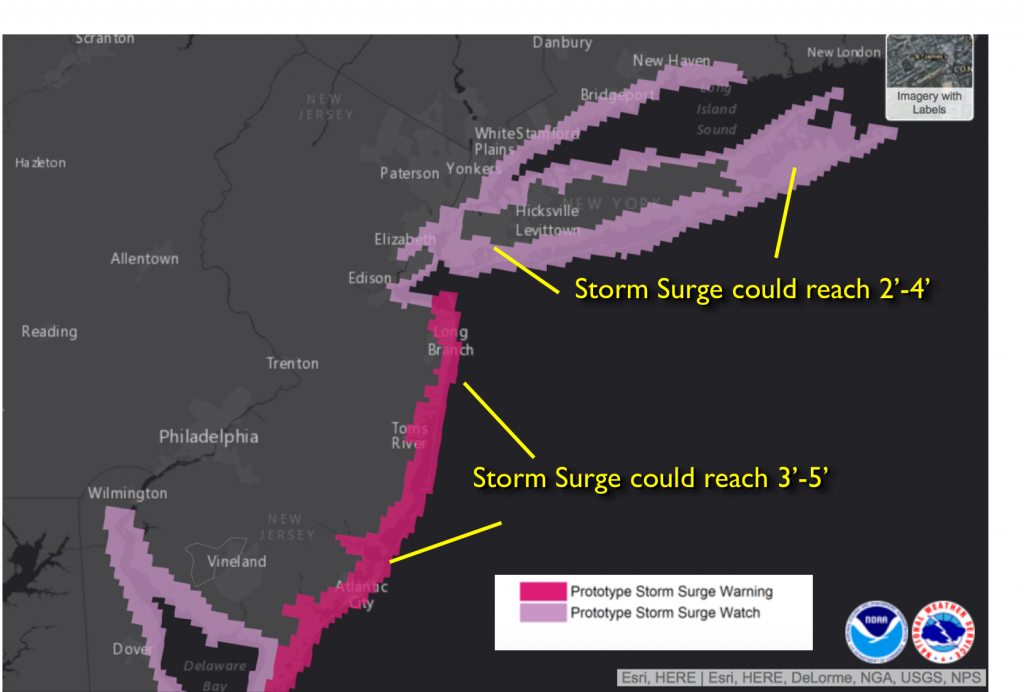 A Tropical Storm Warning is in effect for the entire coast including New York City and vicinity, Long Island and coastal Connecticut for Sunday through at least Labor Day.  Wind gusts of 40-60+mph are possible during this time.  It won’t be windy all the time.  The winds will be much lighter inland.

The latest track and models have the storm slowing down and possibly doing a loop off the Mid-Atlantic coast Sunday into early next week. We will go through many high tide cycles with the storm effecting the area- not good. Coastal flooding and a surge during high tide of 2 to possibly 5 feet is possible for late Sunday and Monday’s high tide cycle, map above (the surge is not etched in stone at this time).  Now is the time to prepare.

Rainfall is the big question.  Will the bands make it to the coast and inland.  It’s possible.  The best chance of rain is later Sunday Night through Labor Day, especially at the coast.  There will be times of sun as well, especially inland.

High surf and dangerous rip currents will be an issue at our local beaches.  Please swim by guarded areas and heed the life guards warnings.

Clear with times of clouds by the coast.  A few showers are possible over Southern NJ. Lows in the mid 60s in the City, the mid 50s inland. Northeast wind 15-25mph with gusts to 30mph at the coast.

Sun and clouds with a chance of rain over South coastal areas by afternoon, becoming windy. Tropical Storm conditions are possible along the coast. Northeast wind at 15-25mph with gusts to 40mph at the coast. Highs in the mid 70s.

Mostly cloudy with areas of rain. Very windy. Tropical Storm conditions are possible along the coast. Highs in the mid to upper 70s.

Mostly cloudy in the morning with a few showers then becoming partly sunny. Windy. Highs in the lower 80s.

Mostly sunny with highs in the mid 80s.

Hazy, hot and humid with highs around 90º. 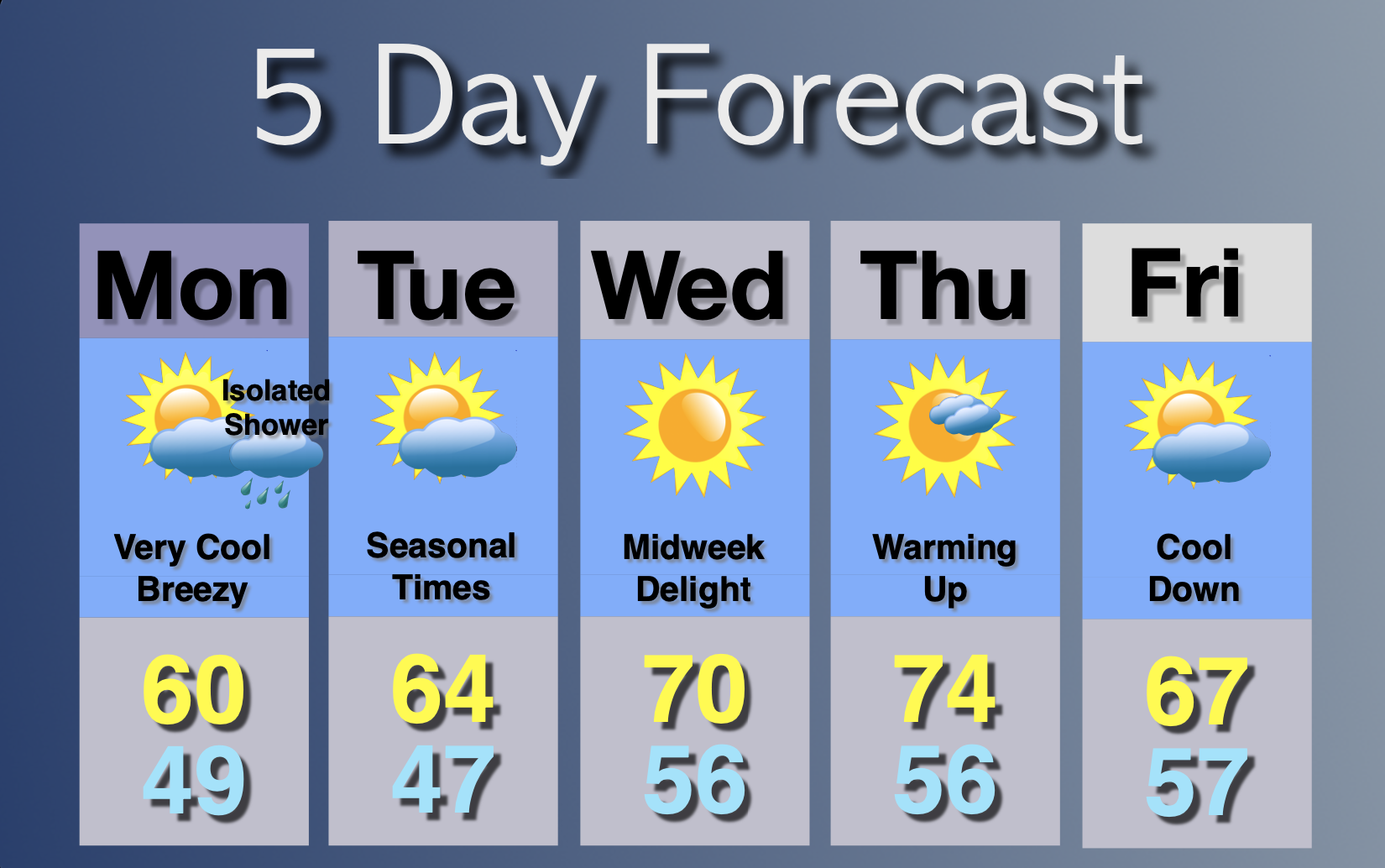